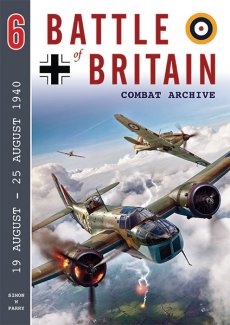 The series will run to around 12 Volumes and will be published quarterly. This volume covers just three days, 16th, 17th and 18th August 1940 but the former and the latter were two of the most significant days of the Battle, covering the death of Billy Fiske, Stukas over Tangmere, Nicolson VC, the Kenley Raid and much more.

Book Title: Battle of Britain Combat Archive Vol 6
Publisher: Red Kite Publications
Title Release: Sep-18
ISBN: 9781906592479
Author: Simon Parry
Format: Paperback
About the Author: Simon W Parry is now one of Britainâ€™s leading aviation historians, but his roots are in Surrey where he began his research into the battles and aircraft crashes in the county 30 years ago, a time it was possible to interview many witnesses to the events. His interest in the air war lead him to become a profession researcher at the National Archives, undertaking a assignments for those not able to conduct their own investigations. Since the publication of his first book in 1987 he has focussed his attentions on the editing and production of over 40 aviation books for publishers. He is also one of Europeâ€™s most experienced aviation archaeologists, contributing to several TV shows, and is now working with Channel 4 on a documentary about the Dambusters.

Be one of the first to review the Battle of Britain Combat Archive Vol 6.