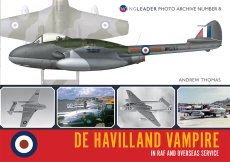 This volume focuses on the operational details of the Vampire aircraft and was the first British jet fighter to be powered by a single seat engine.

An introduction to the NEW Wingleader Photo Archive Series.

‍For quite a few years, Simon Parry and Mark Postlethwaite have been building up a huge library of original WWII aviation photos, partly as a hobby but mainly to help provide photos for the books that they publish. With over 30,000 now in the collection, they realised that they had more than enough to produce a series of photo books on individual aircraft types and sub-types. They set out to make the series as ideally suited to modellers and artists as possible, so large photos, using A4 landscape format, and minimal text except for extended captions. Effectively their aim is to produce a 21st Century version of the Profile Publications series of books from the 1960s, using the latest technology to reproduce their wartime photos to the highest standard possible.

This series is unique in that it will be able to provide large format ORIGINAL photos up to full A4 landscape format width, which is at least 50% larger than any standard book can deliver. Combined with the specialist knowledge of a team of historians and contributors, each book should provide unbeatable and accurate references for any modelling or painting project.

"With this latest volume, we welcome Andrew Thomas to our team of authors. Andrew is an authority on RAF Squadrons and their histories and, having served in the RAF throughout his working life, has an intimate understanding of the subject.

When we first looked at doing the Vampire in this series, we quickly realised that there wasn’t too much point in concentrating on the technical details of what was a very simple aircraft. Instead, it seemed to make sense to focus on the operational side so it was clear that Andrew was the man to approach. Using a combination of his and our photo libraries, we have managed to find photos to illustrate every RAF Squadron that flew the Vampire, plus we’ve got a good sized section to cover overseas use of this early jet fighter. We’ve selected profiles to cover various camouflage and marking variants and have also included colour examples of squadron bars where appropriate.

We do hope you enjoy our first venture into the jet-age in this series, if it proves popular there are certainly several further subjects that we could cover in the future.

Be one of the first to review the De Havilland Vampire In RAF and Overseas Service: Wingleader Photo Archive Number 8.