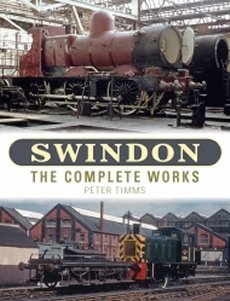 Peter Timm's two previous books on the subject of Swindon works have been combined and rewritten to form the basis for this enlarged work. This is a comprehensive account of the Great Western Railway's main works in what was, in many ways, its heyday. It is written in a way that should appeal to engineers, social historians, railway enthusiasts and people looking for their Swindon ancestors.
The scale is such that it is intended as a work of reference, rather than a straight cover-to-cover read. To that end, each of the twenty-five chapters has been divided into sections and there is a general index. As with most historical research, this study is researched from many varied sources not least from first-hand recollections of the men and women who worked 'inside'. The author also confronts many widely held views and dispels some of the myths. One being that everything that can be written about the GWR has already been written, this book clearly proves otherwise.
In piecemeal form, much has been written about Swindon Works but many aspects of it have remained, until now, neglected. Saying that it?s 'complete' is a bold statement, so perhaps it should be regarded as 'near enough': that?s what old Swindonians used to say when something turned out right.

Be one of the first to review the Swindon: The Complete Works.