Canberra Boys: Fascinating Accounts from the Operators of an English Electric Classic 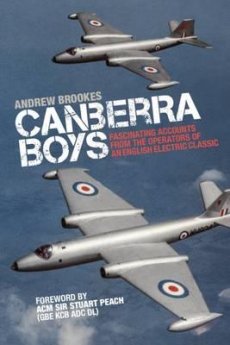 The English Electric Canberra first came into production in the late 1940s and has since played a hugely significant part in world events. In Canberra Boys, Andrew Brookes takes us through its rich history with the help of those who operated this magnificent machine. Contributors include Roly 'Bee' Beamont, the English Electric test pilot who first flew the aircraft in 1949.

As part of the expansion of the RAF's Bomber Command in the 1950s, RAF Binbrook was the first station to house four Canberra squadrons, starting with 101 Squadron in May 1951. Since then and throughout the 20th century, the Canberra operated across the globe in Europe, South America and South East Asia. It has served an array of air forces such as the USAF, Australian air force and the Indian air force – the third largest operator of the Canberra after the RAF and USAF.

This led to the Canberra playing a crucial role as a photo-reconnaissance aircraft in phenomenal operations like the Suez Campaign, the nuclear tests of Operation Grapple and the Indonesian Confrontation. Other tales in the book include participation in the Sassoon Trophy competition, long-distance flights in Exercise Round Trip, and Operation Quick Flight.

Concluding with the Canberra PR9's final RAF flight on 39 Squadron in July 2006, this book provides a detailed and fascinating history of an outstanding aircraft alongside illuminating anecdotes from the men who served with this aircraft.

Book Title: Canberra Boys: Fascinating Accounts from the Operators of an English Electric Classic
Author: Andrew Brookes
Format: Hardback
ISBN: 9781910690338
About the Author: Andrew Brookes completed RAF pilot training after graduating from Leeds University. Following recce and strike tours on Victors, Canberras and Vulcans during which he logged 3,500 flying hours, he joined the tri-service policy and plans staff of Commander British Forces, Hong Kong. After being in charge of the multi-engine, helicopter and flying training desks in the RAF Inspectorate of Flight Safety, he was appointed as the last operational RAF commander at the Greenham Common cruise missile base. He studied International Relations at Downing College, Cambridge, before becoming a group director at the RAF Advanced Staff College. From 1999-2009 he was aerospace specialist at the International Institute for Strategic Studies. Now the chief executive of the Air League, he publishes and broadcasts widely.
Publisher: Grub Street
Title Release: Jul-17

Be one of the first to review the Canberra Boys: Fascinating Accounts from the Operators of an English Electric Classic.