Anglo Nostalgia: Politics of Emotion in a Fractured West 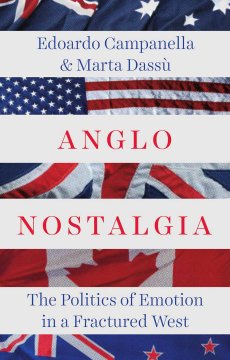 Nostalgia has become a major force in global politics. While Donald Trump promises to ‘make America great again’, Xi Jinping calls for a ‘great rejuvenation of the Chinese people’, and a majority of Russians still mourn the Soviet Union. Now, hardline Brexiteers are yearning for a revival of the British Empire.

Despite its romantic flavour, nostalgia is a malaise—a combination of paranoia and melancholy that idealises the past, while denigrating the present. This epidemic of mythicising national history is shaping politics in risky ways, fuelled by ageing populations, shifts in the global order, and technological disruption. Nowhere has more starkly epitomised this new age of nostalgic nationalism than Britain, where Brexiteers trapped in an idealised past are reviving calls for a political Anglosphere, founded on dreams of their buccaneering heritage and inherent connection with their true ‘kith and kin’.

Drawing on psychology, political science, history and popular culture, Anglo Nostalgia analyses the rapid spread of this global phenomenon, before focusing on Brexit as a case study. Without seeking to judge the wisdom of Britain leaving the EU, Campanella and Dassù expose nostalgia’s great danger: the oversimplification of reality, leading to unprecedented political miscalculations and rising geopolitical tensions.

Be one of the first to review the Anglo Nostalgia: Politics of Emotion in a Fractured West.