Aviation Books > Spitfire Vs 109: Decisive Duel For the Skies In WWII

Spitfire Vs 109: Decisive Duel For the Skies In WWII 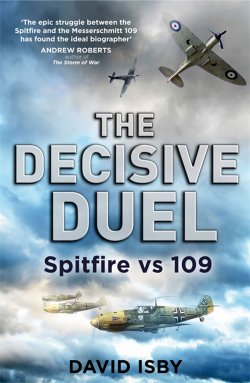 The air battle over Britain shaped the course of WW2. But the fight on the 15th September 1940 in London, as well as a clash of ideology and nations, was itself shaped by the duel between the two most advanced types of warring fighter planes: the British Supermarine Spitfire and the German Messerschmitt Bf 109. In this remarkable new book, David Isby looks at the clash between these two fighter planes, lasting from pre-war development to decisive combat, that made their stories inextricably intertwined.

SPITFIRE VS 109 tells the stories of these iconic, classic aircraft and also the people who created them: Willy Messerschmitt, the German designer with a love for gliders and admiration for Hitler; RJ Mitchell, his brilliant British counterpart, who struggled against illness to complete the design of the Spitfire. In fascinating detail, Isby describes the crucial role the two opposed planes played, from the drawing boards, to Dunkirk, the Battle of Britain, to the final battles over Germany.

In today's Britain, Spitfire's story is particularly resonant both for its wartime achievements and its continuing potency as a symbol. Accessibly written and impeccably researched, SPITFIRE VS 109 is both a wonderful work of aviation history and a valuable insight into the duel between two fighters that shaped the Second World War.

Be one of the first to review the Spitfire Vs 109: Decisive Duel For the Skies In WWII.