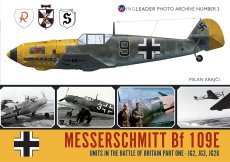 Units in the Battle of Britain Part 1

This book is the first of three in our Wingleader Photo Archive series devoted to Bf 109 Units in the Battle of Britain.  This is a project that we were actually working on some years ago but which stalled through the lack of decent photographs.  With the launch of our new Wingleader series, we saw a way of revitalising the project using all the profiles that had been prepared, and introducing a lot of newly discovered 109 photos.

The result is slightly different to the Spitfire MkI book in that this one concentrates on the units rather than the history of the aircraft itself. The great thing is that each Staffel has a specially commissioned profile by renowned digital artist Piotr Forkasiewicz, (39 in this book alone and 8 extra pages because of it), making it a remarkably colourful read in every way.

The aim of this book is to help the reader identify and understand the various styles of camouflage and markings used by the Bf 109 units during the Battle.  Some had large numerals, some small, some had heavily mottled sides, others pale blue.  Most had emblems and some carried both the Gruppe and Staffel emblems at the same time. The colours of the markings were also significant of course, and again this book explains the system behind them. Do have a look at our sample pages below to see how it looks inside, it's probably one of the most colourful books we've ever published!

Be one of the first to review the Messerschmitt Bf109E: Units in the Battle of Britain Part 1: Wingleader Photo Archive Number 2.