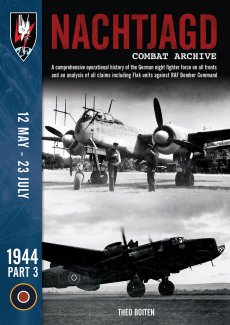 A comprehensive operational history of the German night fighter force on all fronts and an analysis of all claims including Flak units against RAF Bomber Command.

This latest addition to the popular series will cover the period from 12th May to 23rd July 1944.

Red Kite are proud to announce the launch of 1944 Part THREE (12 MAY -23 JULY 1944) in the continuing book series that will prove essential for not only Luftwaffe historians but also anyone with an interest in RAF Bomber Command.

To make this huge work accessible for everyone, the publishers have decided to break it down into a series of 128 page softback books that are grouped into years. This will allow Bomber Command researchers to focus on particular periods of operations without having to invest in a single huge and expensive hardback book.

This volume is the third of either four or five volumes to cover 1944, a year where the tables finally turned against the Nachtjagd, but not before it had inflicted terrible losses upon RAF Bomber Command. This volume covers the period when RAF Bomber Command switched from deep penetration raids into Germany to more tactical targets around D-Day.

Be one of the first to review the Nachtjagd Combat Archive 1944 Part 3.