From Controversy to Cutting Edge: A History of the F-111 in Australian Service 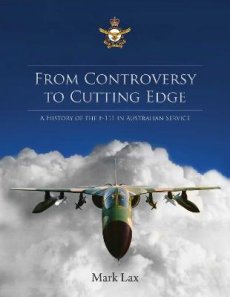 The F-111 is unique among the aircraft that the Royal Australian Air Force has operated throughout its history. Never before has one type had such a profound impact not only on the RAAF, but upon Australia's strategic policy outlook. From the moment it was ordered, however, the F-111 would be shrouded in controversy. Cost blow-outs, delivery delays, technical problems and an undeserved poor reputation meant that the aircraft's place in the frontline of Australia's defence would be continually challenged. Despite the barbs, the aircraft survived to fly in Australia for nearly 40 years-a clear testimony to the skill and dedication of the men and women who flew, maintained and supplied it.

As this amazing aircraft has now departed from service, its story can finally be told with full access to the range of official records regarding its acquisition and operation. The politics spanning fifty years of air force history, the controversies, and that media drama, have all been faithfully and unflinchingly described.

Loved by the public, decried by armchair strategists, the F-111 has at last found its place in Australia's rich military history.

Book Title: From Controversy to Cutting Edge: A History of the F-111 in Australian Service
Author: Mark Lax
Format: Hardback
ISBN: 9781922615176
About the Author: Dr Mark Lax is presently the Senior Air Force Fellow at the RAAF's Office of Air Force History. After a 33-year career in the Permanent Air Force retiring as an Air Commodore, Mark continues to serve in the RAAF Reserve and has since competed a PhD in Military History. Canberra based, he now lectures widely and writes on the broad spectrum of RAAF history in this the RAAF's 100th year.
Publisher: Big Sky Publishing
Title Release: December 2021

Be one of the first to review the From Controversy to Cutting Edge: A History of the F-111 in Australian Service.