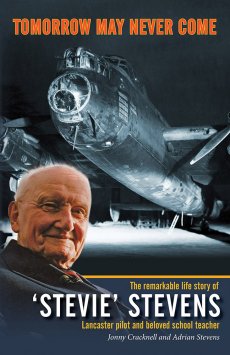 This is the remarkable story of Lancaster pilot Sidney ‘Stevie’ Stevens DFC AE*. After serving as an ARP Controller in London and witnessing his family home obliterated by German bombing during the Blitz, he vowed to become a Bomber Pilot, joined the RAFVR in April 1941, and completed his initial pilot’s training at Carlisle.

In January 1942, Stevie was posted to America, and did his advanced flying training in California near Hollywood, rubbing shoulders with film stars. After gaining his Wings, he returned to the UK and learned to fly Lancasters. In May 1943 he was posted to 57 Squadron at RAF Scampton, in time to watch the Dambusters take-off on their historic mission.

By the end of October 1943, when the survival rate among Bomber Command aircrew was one in five, Stevie had completed a full tour of Operations as the captain of a Lancaster, been awarded the Distinguished Flying Cross, and met his future wife, WAAF Corporal Maureen Miller, who talked down Guy Gibson and his pilots from the control tower at Scampton on their return from the Dams raid.

In 1947, after nearly four hazardous and eventful years instructing on Wellington bombers, Stevie left the RAF, settling in Norwich with Maureen and their son Adrian. He became an innovative and much-loved Maths teacher. When he and Maureen passed away after 74 years of marriage, they were both given lengthy obituaries in The Times.

This book has been a labour of love for all concerned and is designed and printed to the highest standards using full colour throughout. We only have 350 copies available via this website so don't miss out on this unique collector's item.

Book Title: Tomorrow May Never Come
Author: Jonny Cracknell & Adrian Stevens
Format: Hardback
ISBN: 9781908757210
About the Author: Jonny Cracknell is a writer and photographer who in 2019 wrote ‘Against Adversity’, the biography of Battle of Britain pilot Archie McInnes. With many published aviation articles and images in books, the National Press and magazines (inc. Flypast and Aeroplane Magazine), he has built close relationships with many Second World War veterans. Inspired by their courage, heroism and modesty he is driven to share their stories for future generations to remember.

Adrian Stevens, Stevie’s son, was born in Norwich in 1945, just before VJ Day. With Stevie’s active encouragement, he read Modern Languages at Cambridge, and did a PhD in German. He was elected to a Fellowship at Clare College, and later moved to University College London, where he taught German and Comparative Literature. He is currently Honorary Senior Lecturer at the School of European Languages at UCL.
Publisher: Wingleader
Title Release: September 2021

Be one of the first to review the Tomorrow May Never Come.