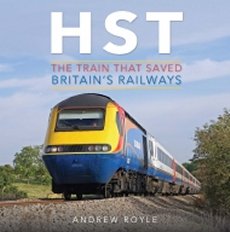 In 1976, the High Speed Train arrived on a British railway scene where trains were predominantly in three colours; blue and grey with a large patch of yellow at the front. On the new trains the yellow warning panel was now strikingly extended down the sides of the power cars, thus beginning a transformation both in terms of the trains themselves as well as in their liveries, from BR’s corporate years to the variety that we see today. HST The Train that Saved Britain’s Railways is a photographic tribute to a train widely credited with rescuing Britain’s railway system from further decline. Few items of rolling stock have stayed in front line service for so long, more than forty years, least of all on longer distance duties. The HST has achieved this whilst leading the move away from traditional patterns of operational practice utilising locomotives and coaches, towards one of fixed formations. This was something of a gamble and it has had its down sides, but is now accepted as the norm. The book focuses on the numerous liveries carried by the HST fleet, particularly since privatisation, rather than on their technical and operational achievements.

This colourful celebration of these magnificent trains shows HSTs in action in a wide range of locations across the network from the lineside and at stations and depots. It is a celebration of a great British success story which will be relished by the legions of enthusiasts who admire them.

Be one of the first to review the HST: The Train That Saved Britain's Railways.