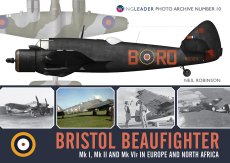 This is part one of two volumes based on the Beaufighter. It focusses on the Mk Is and Mk IIs and the Mk Vif.

For quite a few years, Simon Parry and Mark Postlethwaite have been building up a huge library of original WWII aviation photos, partly as a hobby but mainly to help provide photos for the books that they publish. With over 30,000 now in the collection, they realised that they had more than enough to produce a series of photo books on individual aircraft types and sub-types. They set out to make the series as ideally suited to modellers and artists as possible, so large photos, using A4 landscape format, and minimal text except for extended captions.  Effectively their aim is to produce a 21st Century version of the Profile Publications series of books from the 1960s, using the latest technology to reproduce their wartime photos to the highest standard possible.

This series is unique in that it will be able to provide large format ORIGINAL photos up to full A4 landscape format width, which is at least 50% larger than any standard book can deliver.  Combined with the specialist knowledge of a team of historians and contributors, each book should provide unbeatable and accurate references for any modelling or painting project.

"When we first decided to do the Beaufighter in this series, it was clear that it would take at least two volumes to do the type justice.  The big question was, how to split them?  Night fighters/Day fighters?  Fighter Command/Coastal Command?  In the end, we opted to group the photos by sub type, so in this volume you have all the Mk Is and Mk IIs and the Mk VIf.  The Mk VIC will appear in the next volume/s along with the Mk X and later Mks. As usual in this series, we devote most of the space to high-res original wartime photos, which we examine very closely to pick out details that have been hiding in plain sight for over 70 years."

Book Title: Bristol Beaufighter Mk I, Mk II, Mk IVf: Wingleader Photo Archive Number 10
Author: Neil Robinson
Format: Paperback
ISBN: 9781908757203
About the Author: Growing up in the late 1950s/early 1960s, Neil Robinson had an interest in aeroplanes from an early age, which expressed itself by him spending most of his paper round money buying aviation magazines such as ‘Flying Review’ and ‘Aircraft Illustrated’ and Airfix and Frog kits. Hanging onto every word of W R ‘Bill’ Matthews’ ‘Model Talk’ in ‘Flying Review’ and Alan W Hall’s conversions in ‘Airfix Magazine’, he continued to have an interest in aeroplanes and model making throughout his teens and joined IPMS (UK) in 1969.
After several years of writing articles for aviation enthusiast and aircraft modelling magazines, he was appointed editor of IPMS Magazine in the mid-1980s, after which in the early 1990s he self-published his own magazines, ‘Quarter Scale Modeller’ (for 1/48 scale aircraft modellers) and ‘Seventy Second Scale Modeller’ (for 1/72 scale aircraft modellers), for two years, until his first proper ‘commercial’ editing job in 1995, editing ‘Military ModelCraft’, covering figure, AFV and vehicle modelling, despite all his interest and knowledge being in aviation topics.
Then in late 1998, he took over editorship of ‘Scale Aircraft Modelling’ from the (then) owner, Alan W Hall, during which time he also introduced and edited a new range of enthusiast titles for Guideline Publications – the ‘Camouflage & Markings’ and ‘Combat Colours’ ranges of books.
In the spring of 2003 he helped form a then brand new venture, called The Aviation Workshop. Unfortunately the company tried to grow and expand too quickly and couldn’t support all the creative team members, so he moved to SAM Publications, editing another relatively new magazine, ‘Model Aircraft Monthly’.
After five years with SAM Publications he temporarily re-joined The Aviation Workshop, in April 2010, as Book Production Editor for their range of ‘On Target’ books, before joining forces with a local printer and starting the AIRfile range of camouflage and markings books.
He is now a freelance author and editor, and enjoying his semi-retirement on the east coast of Yorkshire.
Publisher: Wing Leader
Title Release: August 2021

Be one of the first to review the Bristol Beaufighter Mk I, Mk II, Mk IVf: Wingleader Photo Archive Number 10.