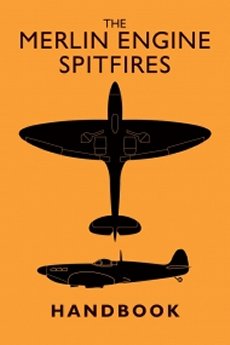 Few can have imagined, when Rolls Royce first ran its new PV-12 aero engine in 1933, that the soon re-named Merlin would go on to be the most famous engine in the world. In a production run that lasted from 1936 to 1956, Rolls Royce built over 160,000 Merlins in 50 different variants, and over 50,000 examples were built in the USA under the Packard name. The early versions of the Merlin produced around 1000 horsepower, but late version Merlins were rated at up to 2000hp and it was Merlin and Packard engines that powered some of the most famous aircraft ever flown, including the Hawker Hurricane, North American P-51 Mustang, the Avro Lancaster and the de Havilland Mosquito.

The inside story of the most famous engine/aircraft combination in history is told in The Merlin Engine Spitfires Handbook. Using original RAF ‘Pilot’s Notes’ from the Crécy Publishing archive, this handbook reproduces the unabridged content, typography and illustration of those historic documents. Covering the Mk1 Spitfire, the Mk9 Spitfire and the Mk16 Spitfire, the reader can see the progression and development of the Spitfire - from the first pre-war version with its Merlin II engine, to the ultimate Spitfire/Merlin combination the 1943 Spitfire 16 with its American-built Packard Merlin 266. The Merlin Engine Spitfires Handbook puts the reader into the cockpit of these iconic aircraft, seeing the very documents those Spitfire pilots had to hand as they flew and fought in possibly the best-known fighter aircraft of all time, a witness to the increasing power and capability of this supreme engine/aircraft pairing.

Be one of the first to review the The Merlin Engine Spitfires Handbook.