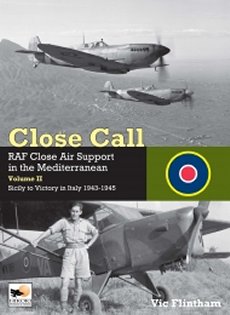 Close support for the Army by the Royal Air Force evolved during WWII from being virtually non-existent to a fully developed part of the battle plan. Nowhere was co-operation more refined and developed than in the Mediterranean theatre.

The first part of this work traced the evolution of close air support through the inter-war years to disaster in France and the first attempts at immediate on-call cover in East Africa provided by the South African Air Force. This led to a much improved system from el Alamein onwards.

Volume II takes the story on from the assault on Sicily through a succession of battles in Italy and southern France where the Allied armies could depend on an immediate air cover, made possible by Allied air forces having total air supremacy. The war in Italy saw much innovation in terms of weapons and also in the role of the air observation post squadrons, both of which are fully discussed.

These volumes include references to official sources and documents, including squadron operational record books, as well as to logbooks, diaries, and autobiographies of many who participated.

Be one of the first to review the Close Call: RAF Close Air Support in the Mediterranean Volume 2.