Stealing from the Saracens 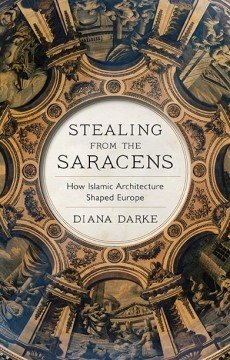 Europeans are in denial. Against a backdrop of Islamophobia, they are increasingly distancing themselves from their cultural debt to the Muslim world. But while the legacy of Islam and the Middle East is in danger of being airbrushed out of Western history, its traces can still be detected in some of Europe’s most recognisable monuments, from Notre-Dame to St Paul’s Cathedral.

In this comprehensively illustrated book, Diana Darke sets out to redress the balance, revealing the Arab and Islamic roots of Europe’s architectural heritage. She tracks the transmission of key innovations from the great capitals of Islam’s early empires, Damascus and Baghdad, via Muslim Spain and Sicily into Europe. Medieval crusaders, pilgrims and merchants from Europe later encountered Arab Muslim culture in journeys to the Holy Land. In more recent centuries, that same route through modern-day Turkey connected Ottoman culture with the West, leading Sir Christopher Wren himself to believe that Gothic architecture should more rightly be called ‘the Saracen style’, because of its Islamic origins.

Recovering this overlooked story within the West’s long history of borrowing from the Islamic world, Darke sheds new light on Europe’s buildings and offers rich insights into the possibilities of cultural exchange.

Book Title: Stealing from the Saracens
Publisher: C Hurst & Co Publishers Ltd
Title Release: September 2020
ISBN: 9781787383050
Author: Diana Darke
Format: Hardback
About the Author: Diana Darke is an Arabist and cultural expert who has lived and worked in the Middle East for over thirty years. She is the author of My House in Damascus: An Inside View of the Syrian Crisis. Her links to Syria are deep and ongoing.

Be one of the first to review the Stealing from the Saracens.